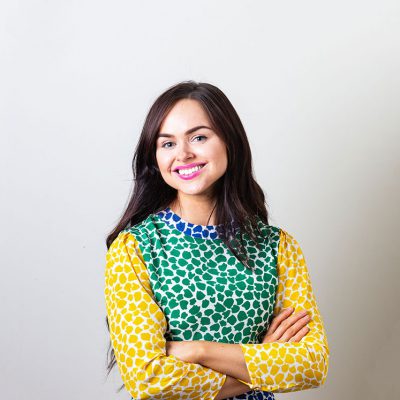 Ailbhe Keane is a Board Director at Rethink Ireland.

She is the Founder and Creative Director of the multi-award-winning brand Izzy Wheels. She was named on Forbes 30 Under 30 in 2018. Izzy Wheels began as a college project for Ailbhe in 2016 when she noticed that her sister’s wheelchair was the first thing that people noticed about her but it was a reflection of her bright and bubbly personality. Ailbhe designed a range of colourful wheel covers to express her sister’s style. Their tagline became ‘If you can’t stand up, stand out’. The project was awarded first-class honours by The National College of Art and Design and gained major global media attention.

Overnight, what started as a ‘kitchen’ company went viral on Instagram and business exploded. Today Izzy Wheels sells to over 35 countries. They have collaborated with famous designers across the globe including Barbie, Orla Kiely and Maser. It’s also featured in some of the world’s biggest publications including Vogue, Cosmopolitan, TechCrunch, Forbes, BBC Amazing Humans and Oprah Magazine. They became the first Irish people to take over Instagram’s official story which had a reach of 250 million people.

Ailbhe is passionate about combining art with business, bridging the gap between disability and fashion, and making the world a more inclusive place for all.